The Dark Triad or the fifty shades of gray in leadership 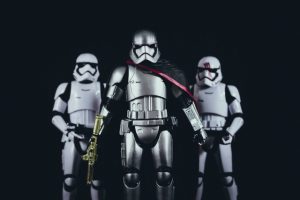 How dark is your personality? Are you a manipulative person?  Can you switch off your empathy? Are you completely obsessed with yourself? If your answer is yes, you might want to pay attention to your dark side. “Dark” leaders may be toxic but still be as effective as pro-social, self-controlled, and “good” leaders. Let’s explore.

The Dark Triad refers to personality traits that are different, yet related. These are narcissism, Machiavellianism, and psychopathy. Having them makes a person difficult to manage. Taken together, the most powerful tendency underlying all three Dark Triad traits is a knack for exploiting others.

What are the three traits of the Dark Triad?

This term came about because of the Greek myth of Narcissus, a young man who fell in love with his reflection after looking at himself in a pond of water. He became so engrossed in it that he fell into the water and drowned.

Those displaying narcissistic qualities, are more likely to demonstrate grandiosity, pride, egotism and a lack of empathy. Narcissism can be described as ‘self love’; these are people who value themselves highly and put themselves above others. Narcissists are characterized by excessive vanity, feelings of superiority and arrogance, as well as a strong need for admiration and entitlement. Think about the type of person who loves to be recognized for an achievement even if they didn’t contribute to making it happen. Narcissists have a low tolerance for criticism and no qualms about manipulating others for their gain. What is noteworthy is that people are narcissistic to different degrees.

Narcissism is likely the most common trait among “dysfunctional” bosses, and they tend to get the farthest ahead. This is often because, at first meeting, we find narcissists more likable and interesting and are often drawn to their confidence and “sexy” charismatic persona, while mistaking their characteristics for competence and good leadership. Most boardrooms welcome someone with assertiveness and creativity – traits fuelled by a healthy level of self-confidence. The part that becomes hard to manage is the overwhelming sense of superiority, recklessness and contempt for others that is rooted in someone with strong narcissism.

2. Machiavellianism: The end justifies the means

16th-century Italian diplomat, Niccolo Machiavelli gets the credit for the term ‘Machiavellianism.’ It comes from his most famous text ‘The Prince’ that still exists today as one of the premiere treatise on psychological warfare and manipulation. Machiavellianism is characterized by the manipulation and exploitation of other people. Those who can be classified as having Machiavellian personalities, will be more likely to manipulate others to get their own ends.

People with such traits take lying to new heights. They have no morals or feelings for others. They throw anyone under the bus if it means they come out on top. Machiavellians use manipulative strategies to achieve their goals without considering morality. They are often described as immoral, cynical, and highly calculative.

The Machiavellian types also tend to show up in executive roles because they are conniving and ruthless in twisting people into doing what they want to do – it is first nature to them. Once they reach the top, they stay there and are tough and domineering – creating an environment where many fear questioning them and avoid being on their radar. You find that only the most passive or “yes men” type of employees remain in such an organization for a prolonged period of time. Conversely, while many of the traits associated with Machiavellianism can make these people your worst nightmare – they are also acutely more observant and attentive to detail. It can be a positive trait in that it makes a person extremely pragmatic and adaptive.

Those with psychopathic traits have no feelings for others. Because they have no remorse, they show anti-social behaviors. Many of them are explosive and controlling. Note that having these qualities does not make a person a psychopath. Though those with psychopathic qualities are unpredictable, they are not necessarily criminals. Psychopathy shows itself in low or absent empathy, high impulsivity, heartless social attitudes, and interpersonal hostility.

Psychopathy is closely related to sociopathy and generally involves a lack of regard for others or consideration for their feelings. Psychopaths are more likely to break rules or hurt others if it means getting what they want.

Psychopaths are considered the most toxic of the Dark Triad with a powerful impact on employees’ mood, mental health, and job performance. Psychopathic bosses also disrupt their employees’ work-life balance leading to psychological distress and are linked with diminished corporate responsibility as well as reduced productivity. Psychopaths are not ideal leaders as they don’t possess any sense of thought or care for those around them. They are successful, nonetheless, because they are often bold, confident and focused.

Here is a humorous way to sum up the three Dark Triad traits:

“A narcissist, a psychopath and a Machiavellian walk into a bar. The bartender asks, ‘who has the darkest personality out of you three?’ The narcissist says ‘me’, the psychopath says, ‘I don’t care’ and the Mach says ‘it’s whoever I want it to be’.”

People who show these qualities are trying to get away with acting out against others in order to achieve their own ends. Each of the individual qualities alone can make life difficult for those who know people like this. Combined, the Dark Triad traits in another person can be detrimental to your mental and emotional health.

How can we spot a “dark” leader?

The first step to coping with someone who has the Dark Triad is to recognize its signs. Psychologists Jonason and Webster’s Dirty Dozen scale can give you a quick way to spot the Dark Triad individual in your midst. Rate each item on a 7-point scale as you think it applies to this person. Of course, you can also rate yourself on these qualities to see how you measure up

What can “dark” leaders do to develop brighter sides to their personalities?

How do you manage leaders with Dark Triad traits?

First of all, remember that these people are not ‘evil’ and none of this means that they don’t also have positive qualities. In fact, according to some theories, many of these traits are actually a sign of insecurity or a lack of self-esteem. Narcissism, for example, is believed to be a defense mechanism adopted by those who feel they aren’t getting the love they crave from others. Their remaining recourse then is to turn inward and provide the love themselves. They project an image of great confidence and even believe it themselves; however, this may be their way of hiding a serious insecurity.

There are many subtleties and gradations of personality types, and the behaviors associated with them can change from day to day. As a manager, you will need to address negative behaviors to maintain productivity within your team right away. If you let them fool you, they’ll rule you.

What can we learn from leaders with Dark Triad traits?

Narcissists inspire enthusiasm. Narcissists achieve amazing goals by putting their needs and desires ahead of everything and everyone else. They are great at presenting themselves and their ideas, and they are incredibly enthusiastic about things that are important to them. Most important, they can be great at getting others on board. Whenever you want to win someone over, show an attitude a narcissist might have: “I am awesome, and this is the best idea you are ever going to hear.”

Manipulators know how to influence others. Manipulators know all the buttons to push to get what they want from the people around them. There are many ways of influencing others, including ingratiation, forming political alliances, horse trading, and even threats. Manipulating people toward a goal that will benefit them as well as you is the essence of leadership. Hence, consider trying the full range of tactics for influencing others if the end results are worth it.

Psychopaths don’t look back. They have a willingness to put themselves ahead of other people, coupled with very little shame or remorse when they have done wrong. They bounce back very quickly from failure. And as a result, they are willing to make mistakes and take risks. Those are qualities of resilience every leader can use. Next time something goes wrong, simply say “I made a mistake”, accept it, and move on.

Managing the quality and best fit of your organization’s candidates starts with an empowered human resources department that can assess the traits of their hires.

When the pressure is on, the line between strength and weakness is not always clear – drive becomes ruthless ambition, attention to detail becomes micromanaging. The dark side of your personality derails careers and companies. It does not have to. Inspired Executives offer Hogan Leadership Assessments that measure personality characteristics, career derailment risks, core value drivers, cognitive style and decision-making. Great data that informs hiring decisions and development plans. Contact us.

Build the skills you need to cope. Be assertive, savvy and confident when managing triadic leaders and in dealing with conflict. There are various ways to improve your skills in this area. Let’s talk. Contact us.