Are You Doing Water Ballet in the Shark Tank?

Did you know that the earliest known sharks date back to more than 420 million years ago? Since then, sharks have diversified into over 500 species that range in size from only 6.7 in to approximately 40 ft in length. Species like the great white shark, tiger shark, or hammerhead shark are at the top of their underwater food chain. 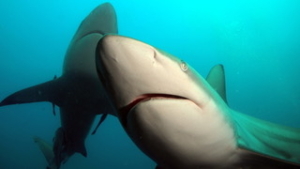 The sharks in the corporate shark tank can be bullies, sycophants, brownnosers, control-freak bosses, snakes, office princesses, boss‘ pets, backstabbers, apple polishers, yes-men, credit stealers, disgruntled peers, and … . You have probably heard of them, might know them, and even have some on your team.

How successfully are you playing with them? Are you doing water ballet in the shark tank, i.e. trying to stay out of the political fray?

The leadership capacity of an organization involves emotion: People are inspired by dreams not by plans after all. How people operate as leaders depends on their own beliefs, values and experiences, how they manage stressful situations and how comfortable they feel about themselves in their role. This is significantly impacted by what is happening in the organization: its context and culture, its strategy and politics, the team dynamics and the emotions people in the organization have about their work. Leaders who act with integrity in challenging environments are able to assess the current context skillfully and to manage what is personally carried into difficult situations wisely.

There is a political animal within each of us. To facilitate the learning about emotion/ality in organizational systems, I have often used the framework designed by Baddely and James in the 1980s “Owl, Fox, Donkey, Sheep: Political Skills for Managers”. In order to differentiate between these ‘political animals’, they used two axes to generate a four-quadrant model. The north-south axis had ‘politically aware’ and ‘politically unaware’ as the extremes, while the east-west axis was a contrast between ‘psychological game playing’ and ‘acting with integrity’. 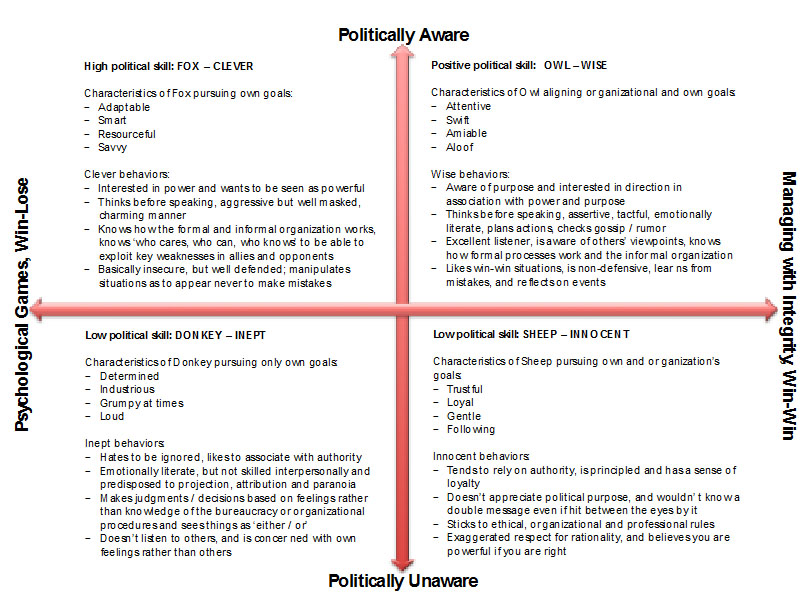 As always, becoming self-aware of which political animal you tend to be in various situations is the first critical step in managing the ‘emotional turmoil’ and making effective choices in how to act in a context that contains different and difficult to understand viewpoints and approaches. Here are a few other steps you can take to stop doing water ballet in the shark tank:

Leaders need the ability to simultaneously understand the world ‘out there’ and their interior world, make sense of both and choose appropriate behavior – wise, clever, inept or innocent. Contact us. We help you understand emotion and emotionality in organizations.

Keep cool. Swim with the sharks and lead fearlessly, Annette.