How Women Manage Office Politics – Yes, We Can Play the Game!

Office Politics are a fact of corporate life; positive or negative – politics happens. The reality is that politics is how power is managed on a practical basis everyday.
The drama that unfolds as co-workers and top leaders play the game, form alliances, take credit, manipulate, trade favors to move upowards, show favoritism or schmooze can be interesting, entertaining, exciting or frightening – depending on your perspective. Raise your hand if you hate politics! Shouldn’t talent, performance, and hard work be what advances our careers, ladies? 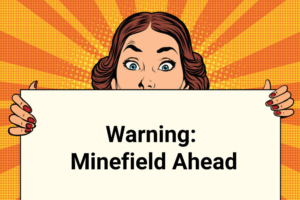 Think about it. Did you know that …

So, is it really true that women must perform twice as well to be thought half as good in the workplace? Let’s explore how men and women navigate the minefield. Politics are an inevitable part of the back-and-forth mechanics of decision-making, and the right strategies can make dealing with political situations much easier. Yet, men and women take slightly different approaches.

Guys consider office politics to be more of a knockabout game, and when they are outplayed, they don’t hold grudges. Men tend to be hierarchical, competitive, and concerned with who is bigger, better, stronger, or whatever, which can create unhealthy competition with coworkers. Some guys have trouble acknowledging that anyone has the authority to direct their activities, which sometimes gets them into trouble with their managers. Men are less likely to admit mistakes and offer appropriate apologies, sometimes leaving others annoyed and angry. Men may see a need for collaboration as a sign of weakness. They are then less likely to form helpful partnerships with work colleagues.

Office politics has very little to do with morality and everything to do with managing relationships and getting the job done. In other words: it’s not optional. In performance discussions, women on average get acknowledged for how they forge relationships, i.e. managing clients, vendors, peers and direct reports. Yet, women tend to get lower marks when it comes to managing up. Women are more likely to have emotional reactions to business issues, which can lead to unnecessary conflicts. Women tend to use “conditional speech”. They often qualify their statements with words like ‘maybe’ or ‘probably’, making them seem less certain of their views. In meetings, presentations, and discussions, women often give away their power by allowing men to interrupt and take over. Never give up the floor.

Office politics is a familiar term in all professional arenas. In the dictionary of a professional woman, though, it almost spells like a dirty word. Most women choose to keep away from anything termed as office politics because a large percentage of them view it as unethical, manipulative, unauthentic behavior. You cannot change the sink-or-swim environment or senior management, but you can choose your attitude. You always have a choice. Here is how women can flex their political muscle:

The bottom line is that it is just not possible to opt out of the political game at work and still win in your career. One of the reasons politics makes so many of us uneasy is that complex situations are difficult to read and impossible to control. When personalities and motivations intertwine, anything can happen. Women will excel at developing others, inspiring and motivating others, relationship building, collaboration and teamwork.

Reframe the way you look at office politics and think of it as strategic relationship-building. Your career or your business are a team sport. You cannot run either in a vacuum. Contact us to refine your approach to managing office politics. We will help you swim with the sharks.

Go for it. Choose to lead – always.